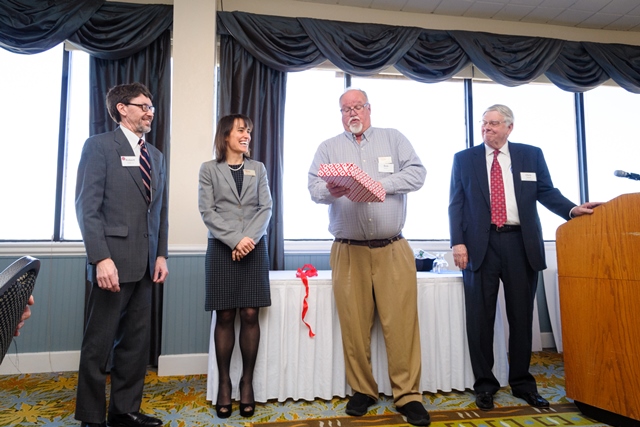 After a beautiful and enthusiastic musical performance by the Monarch Lighthouse Club Bell Ringers, guests enjoyed a delicious lunch and elected four new members to the Community Foundation’s board of directors: Bruce Austin of Manteo, Nancy Caviness of Duck, Greg Honeycutt of Ocracoke, and Clark Twiddy of Colington.

Scott Brown and Nancy Sugg, Co-Chairs of the Scholarship Committee, announced that the Community Foundation gave out over $150,000 in scholarships to 75 deserving students in 2016. Scott Leggat, Chair of the Grants Committee, announced that over $500,000 in grants were awarded in 2016 through Community Enrichment Grants, Donor-Advised Funds, and other endowment distributions.

Video contest winners were announced: the Dare County Arts Council came in first place, winning a grant of $2,000, followed by GEM Adult Day Services in second place with a grant of $1,000, and Food for Thought in third place with a grant of $500. The winning videos, as well as all of the entries from this year’s and past years’ contests, can be viewed below, or by clicking here.

Chris Seawell, Vice-President of the Community Foundation, conferred this year’s Champion Award posthumously to Don and Catharine Bryan, the founders and sustainers of the Don & Catharine Bryan Cultural Series, a nonprofit that brings significant arts and cultural events to the Outer Banks.

In announcing the award, Mr. Seawell stated: “In addition to their legacy of service to our country and their selfless participation in local government and volunteerism, Don and Catharine were passionate about the arts. With many of their neighbors, they had a vision of inspiring, educating, and challenging our community through presentations of exceptional visual, literary, and performing arts. To ensure this vision, they chose to leave significant gifts in their wills to the Outer Banks Community Foundation.”

Finally, Teresa Osborne, the 2017 President of the Community Foundation, closed the meeting with the news that in honor of the organization’s upcoming 35th birthday on November 30, 2017, the Community Foundation would offer a Matching Fund Challenge for nonprofits. Eighteen nonprofits are now registered for endowment support through the Challenge.

Photograph courtesy of Biff Jennings, Shooters at the Beach.

BELOW: Playlist of all video contest entries since 2012!

Community Foundation Awards Over $43,000 in Grants
Scroll to top