Blog - Latest News
You are here: Home1 / News & Updates2 / A Lifetime of “Putting Back” 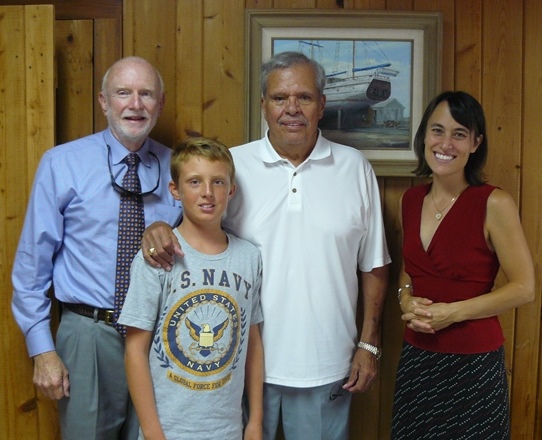 Jack Adams, one of the founding directors of the Outer Banks Community Foundation, has a history of giving back to the community in which he lives.

“I’ve always had the desire to help. It’s something I’ve always believed in,” he said.

That desire to give back may have been why Jack signed on to the fledgling charitable foundation in 1982. Or it may have been founder David Stick, who could be very persuasive.

The first CPA to live and work in Dare County, Jack had gotten to known David through work.

“David Stick was a client of mine,” he recalled. “He was one of the owners of Southern Shores Realty and Kitty Hawk Land Company. I was working very closely with him.”

There must have been something about Jack’s work that David liked, because he broached Jack with an idea he had been discussing with other community leaders.

“He came to me one day and said he had been talking with Edward Greene, Andy Griffith, George Crocker, and Marty Kellogg. He didn’t want a private fund, but something that gave back into the community. Based on what he said, we were able to get a 501c3 so we could get money from various donors,” Jack said.

As important as David was to Jack’s community involvement, what seemed to truly motivate him was a slogan crafted by Wallace McCown, one of the first members of the Community Foundation.

“He came up with the slogan, ‘Put something back.’ It stuck in my mind, that you can’t just keep taking something from a community without putting back to help others,” he said.

Although no longer living on the Outer Banks, that belief in “putting back” is still a part of his life. He and his wife have recently created two endowments at the Community Foundation that will help to make the Outer Banks a better place to live.

The Adams Family Fund for Animals was established last year to provide grants to nonprofit organizations that work with animals, with an emphasis on groups that provide shelter for dogs with the goal of finding them a permanent home.

“My wife and I have dogs. Specifically bassets,” he explained. “My wife, Susan Brown, has devoted all of her time to the rescue of animals, especially dogs. We have fostered numerous dogs over the last 20 years for the purpose of finding loving homes for them. It’s something we’ve always been interested in.”

In addition to the Fund for Animals, Jack also established the Adams Family Fund, an unrestricted fund.

“For whatever the needs of the community are,” he said. “Scholarships. A grant for the Food Pantry, if that is what is needed. It’s just like a general fund type of thing.”

Thanks to a relatively new tax law, Jack has been able to contribute to both funds directly from his retirement investments.

“The IRS allows you to make a contribution directly to a nonprofit from a retirement plan,” Jack said. This strategy is often recommended by the Community Foundation and by tax experts, because donating directly from a retirement account can result in a significant savings on income tax. (More information on the IRA strategy here.)

He has also pledged a planned gift to the Community Foundation—a bequest that one day will increase his two endowment funds and perpetuate his legacy of giving.

Jack remained active with the Community Foundation throughout the time he lived in the area. “After David Stick, I was the President of the organization,” Jack said.

His giving—his putting back—has not been limited to just the Outer Banks.

The lessons he learned about making his community a better place and how to contribute stayed with him, even after he left Dare County.

He moved to Arkansas and then to Savannah, Tennessee, where he now lives, and where he continued to work with community organizations.

For Jack Adams there has been a history of giving back, and much of that philosophy began with those talks with David Stick, the slogan that Wallace McCown created, and the first days of the Outer Banks Community Foundation.

“You can’t just keep taking something from a community without putting back to help others. It just gets back to what you’re supposed to do,” he said.

2018 Scholarships — A Gift from a Caring Community