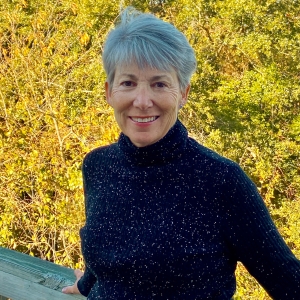 The Annual Advice 5k Turkey Trot Fund at Outer Banks Community Foundation provides significant support for many of the organization’s health and human service grant awards each year. Fund establisher Nancy Caviness has worked diligently for nearly a decade to raise money for this fund, donating proceeds raised through an annual event to support local health and human service projects.

She created and has served as race director of the Annual Advice 5K Turkey Trot race, held historically on Thanksgiving Day in Duck since 1996. This story highlights Caviness’ extraordinary contributions to her community, of which the Turkey Trot Fund plays a part.

Nancy Caviness has been awarded a 2022 North Carolina Governor’s Volunteer Service award for her volunteer service to the Duck Volunteer Fire Department as well as the Annual Advice 5K Turkey Trot. Caviness was nominated for the award by Town of Duck Mayor Don Kingston.

Nancy has been a member of the Duck Volunteer Fire Department for over 22 years, and each year she averages over 100 hours in training and over 200 hours in call response. Early in her tenure, she saw the need for firefighter hydration and nutrition on long incidents and in warm environments. She was part of the team that started Rehab 11, which provided hydration and initial vital signs and symptom monitoring on major emergency calls. Soon Caviness discovered she could provide more help and trained to assist on emergency incidents beyond rehab and advanced to support lieutenant. Her skills include exterior firefighting, extrication, traffic control and assistance to the incident commander on high-acuity incidents.

“Over the years, she has become a highly respected and invaluable member of the firefighting and public safety community,” Kingston wrote in his nominator form. “With an educational background in public health, her passion for the health and safety of first responders and the public runs deep.”

Caviness founded the Annual Advice 5K Turkey Trot in 1996 and has served as its race director since its inception. Funds raised in the early years of the race were donated to a wide range of nonprofits on the Outer Banks, and in 2013, a permanent endowment was established with the Outer Banks Community Foundation (OBCF) with the purpose of supporting and improving the public health of the Outer Banks.

“For the 25th anniversary race she set the significant fundraising goal of $25,000 for the endowment. Through her hard work and determination that goal was exceeded and $33,000 was raised,” wrote Kingston. “To date, the Advice 5K Turkey Trot has raised and contributed hundreds of thousands of dollars to the Outer Banks community. Nancy’s outstanding leadership, management and organizational skills provide the basis for each successful race event. On average, she spends over 500 hours a year, approximately 10 hours a week, on race planning.”

Kingston also noted in his nomination form that, due to the COVID-19 pandemic, Caviness had to make changes to the 2021 event in order to ensure participant and volunteer health and safety, which added many additional hours to the preparation process. “The extra hours were taken on with grace and selflessness,” he wrote.

The nonprofit organizations and health initiatives that the endowment has assisted through the Community Foundation’s grants programs over the years include Outer Banks Hotline, the Community Care Clinic of Dare, Children and Youth Partnership for Dare County, NC MedAssist, Food For Thought Outer Banks, and the Outer Banks Family YMCA.

In addition to raising funds, Caviness also served on the Community Foundation’s board from 2017 to 2022. During her final term as board member, she served as Scholarship Committee Chair, a leadership role that involved dozens of hours and the management of volunteer committees whose purpose was to select scholarship recipients from all area schools.

Lorelei Costa Morrow, former executive director of the OBCF, is complimentary of the thoughtfulness and care with which Caviness took in setting up the endowment. She wanted a fund that would continue growing even if the race no longer takes place, and that would continue to benefit the community for generations to come. According to Morrow, “She would read hundreds of scholarship applications. She was always mindful of students who would not necessarily have had other funding opportunities for school. She wanted to make sure those students that might be overlooked had a chance.”

In addition to her volunteer service to the Duck Volunteer Fire Department and the Annual Advice 5K Turkey Trot, Caviness has also served the Outer Banks community in multiple capacities since relocating to the area in 1995, as she formerly served on the Dare County Tourism Board and as the Town of Duck’s liaison to the Outer Banks Visitors Bureau.

“Nancy has and continues to serve both the Town of Duck and the Outer Banks community as a dedicated and caring individual,” Kingston stated in his nomination form. “Her selflessness is reflected in all that she does. Her community service roots run deep, and she is a true champion of this community.”