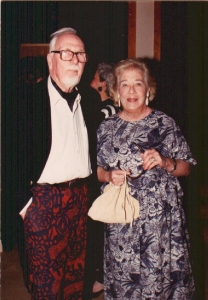 Local artist Dorothy Luedemann left a legacy of artwork after her death: sculptures, map prints, paintings, and more. But her greatest legacy might be the two bequests that she gave to the Outer Banks Community Foundation — one to provide scholarships for arts students, and the other to provide grants to nonprofits for art-related projects.

On Friday, November 1, local high school students will benefit. Thanks to a grant from the Charles H. & Dorothy S. Luedemann Arts Fund, the Outer Banks Forum for the Lively Arts will provide master classes in singing for dozens of chorus members and music students from First Flight, Manteo, and Cape Hatteras schools.
The classes will be taught by the Grammy-winning, all-male singing group Chanticleer. Though known widely for its interpretation of Renaissance music, Chanticleer sings a variety of genres, including jazz and pop music. Chanticleer will also perform for the general public on Saturday, November 2 as part of the Forum’s regular concert series.

San Francisco-based Chanticleer has won three Grammy Awards, and was named Musical America’s 2008 Ensemble of the Year. In 2008, it became the first vocal ensemble to be inducted into the American Classical Music Hall of Fame. The group also has more than two dozen recordings.

During the master class, Chanticleer singers will not only perform for local students but also listen to the students perform, and critique and instruct them.

The seeds of generosity that has made the master classes possible were planted more than 50 years ago.

Eddie Greene, one of the Community Foundation founders, remembers when he first met Mr. and Mrs. Luedemann.

“I had been in the Lost Colony in previous summers but, because I had joined the actors’ union, I couldn’t perform for them any more. I loved Manteo and came down that summer anyway. I rented a small house that is now part of the Island Gallery and Christmas Shop, and that summer I used the living room as an art gallery.

“Dorothy and Charlie walked in one day in 1962 and were surprised at the atmosphere and at hearing the classical music I always played on the phonograph,” said Greene. “They were real characters and stopped by whenever they were in the area.”

“Charlie started an insulation business, and she opened a studio and gallery near the Wright Memorial Bridge,” said Greene.

According to several stories printed in the Coastland Times, Mrs. Luedemann frequently participated in area art shows and encouraged children to become involved in the arts.

In 1998, Ernest White was one of the first to receive a scholarship from the new Charles H. & Dorothy S. Luedemann Scholarship Fund.

“That scholarship played an important role in my life,” said White, owner of VA Displays in Smithfield, Virginia. “It not only helped me financially with the cost of college; it also indicated that someone believed in me, and it forced me to keep up my grade point average so that I could continue renewing each semester.”

Four and half years before receiving his college diplomas, White dropped out of high school. He enrolled in the GED program at the College of the Albemarle’s Dare Campus. “When I finished the GED, I had enjoyed the experience so much that I enrolled in classes. I graduated with an associate’s degree in art and then transferred to the School of Design.” He received $1,000 in Luedemann scholarships each year that he attended COA, and $2,000 for each of the two years that he attended the NCSU School of Design.

Recently, he paid off his student loans and that event, he said, sparked a conversation with himself about how he might help others achieve success. “Because of the scholarship, the amount I had to pay back in loans was lower. My wife, JoAnn, is an accountant, and we are still paying off her student loans,” he said.

“I have a career that I enjoy and can do at home. And there is a bonus because my 10-month-old daughter, Annabelle, keeps me company while I work, so I get to spend a lot of time with her.

A more recent college graduate also expresses appreciation for the help that he received through the Luedemann scholarship program.

Manteo resident Israel Southern graduated from Manteo High School in 2008 and received his first scholarship from the Luedemann fund. “The following year, when I was to reapply for the scholarship, my grandmother suffered a severe stroke, and my schedule was altered to the point that I did not get to reapply for my sophomore year at East Carolina University. However, I reapplied and received the scholarships in both my junior and senior years at ECU. Those wonderful scholarships helped me to purchase all the art supplies I needed for my art classes while I was working on my bachelor of fine arts degree in photography.

“Paint brushes, canvas, photo paper, film, paper, pencils, pens — I could go on and on with a list of things that I was able to buy for my classes. This helped me so much in achieving my goal of graduating on time. I was truly blessed with these wonderful supplies, many of which I still have to this day. It made a difference in my life, and I am ever so grateful!”

More than 15 years after her death, Mrs. Luedemann has helped more than 63 local students seek a higher education in arts — $157,000 in scholarships to date. Her bequest has restored musical instruments, purchased costumes and stage equipment, and sponsored theatrical, dance, and musical performances, in partnership with over a dozen local groups, including the Lost Colony, Elizabeth R & Company, the Dare County Arts Council, and the Freedmen’s Colony of Roanoke Island — in total more than $184,000 in arts grants.

Because Mrs. Luedemann’s bequest remains invested as endowment, only five percent of the fund is awarded in any given year. The remaining principal and earnings are reinvested each year so that the funds can make grants and scholarships forever. Mrs. Luedemann’s $357,000 gift has awarded over $341,000 in grants and scholarships, and remains growing with a current balance of $503,000.

Now and forever, Mrs. Luedemann’s bequest is weaving arts and culture into the fabric of the Outer Banks.