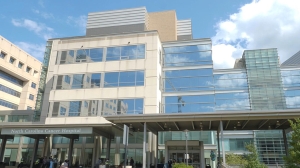 UNC Health announced on Monday that North Carolina’s state cancer hospital will now bear the name of one of its most influential and dedicated supporters. As a tribute to the legacy of the late Senator Marc Basnight, the longest serving legislative leader in our state’s history who passed away in 2020, the building was officially renamed the North Carolina Basnight Cancer Hospital in a ceremony on Monday, September 19, at UNC Hospitals in Chapel Hill. “The mission of UNC Health is to promote the health and well-being of the people of North Carolina,” said Wesley Burks, MD, CEO of UNC Health and Dean of the UNC School of Medicine. “Today was a great opportunity to come together to honor Senator Basnight, a man who embodied that mission throughout his career in public service.”

A man who, driven by vision and commitment to a state that would champion the health of all its citizens, made this hospital possible.

Inspired by doctors, researchers, patients, and caregivers he met during his beloved wife Sandy’s battle with cancer, Senator Basnight’s leadership toward North Carolina’s investment in the fight against cancer impacts every patient who walks through these doors. The University of North Carolina’s Cancer Research Fund, Biomedical Research Imaging Center, and this hospital are all a direct result of his unwavering focus on the lives of every citizen in our state.

“This place is an important part of his sweeping legacy, and it is so fitting that it should carry his name… but he wouldn’t care about that much,” said Governor Roy Cooper at the dedication ceremony. “He really didn’t want to be anything that he wasn’t already…he just wanted to get it done. Well here we are Marc, good work. Get it done, my friend. Get it done.”

UNC Health produced a video of the September 19, 2022 dedication.