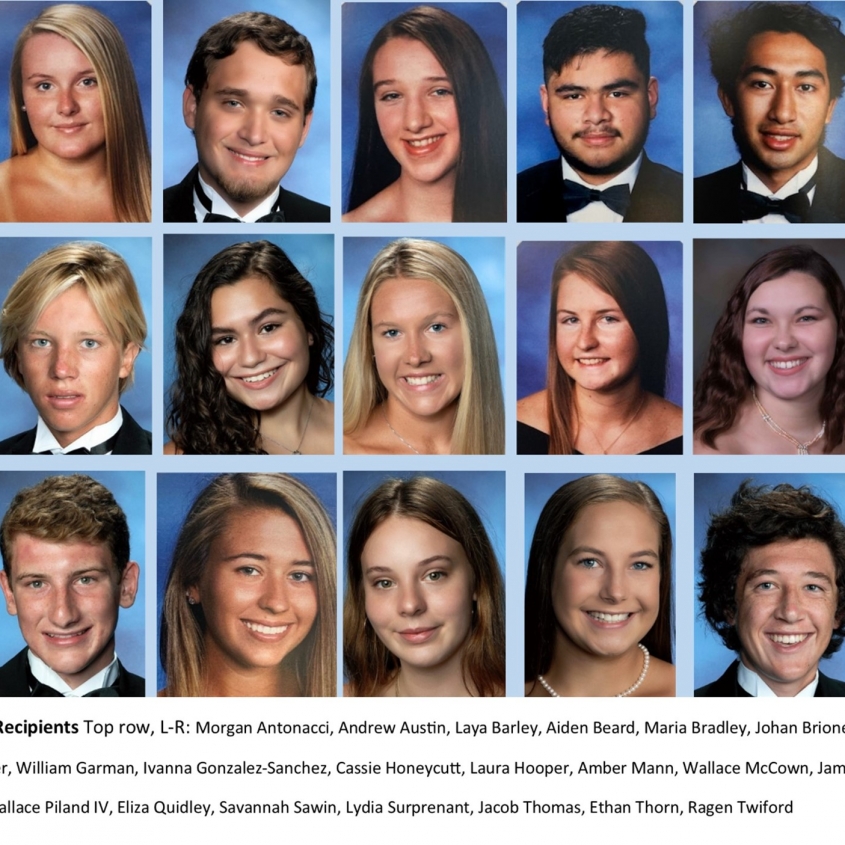 The Outer Banks Community Foundation awarded $174,900 in scholarships this spring, helping students from across the Outer Banks achieve their educational dreams.

In addition to these awards, the Community Foundation has also renewed financial support to 24 current college students who earned multi-year scholarships.

The Milton A. Jewell Academic Scholarship, a four-year, $24,000 renewable scholarship, was awarded to Siena Nason, a graduating senior of the N.C. School of Science and Math. Siena is attending the University of Pennsylvania, where she will study biochemistry.

The Jerry and Arlene Davis Scholarship, another four-year, $24,000 renewable scholarship, went to Ivanna Gonzalez-Sanchez, a First Flight High School graduating senior. Ivanna will attend UNC-Wilmington in the fall and plans to study business and political science. She hopes to pursue graduate studies in law.

The Elizabeth and Wayne Evans Scholarship, a four-year, $20,000 renewable scholarship, was awarded to Laya Barley, a rising college freshman from Cape Hatteras Secondary School. Laya will study for a degree in nursing at East Carolina University.

The Josephine A. Oden Scholarship, a four-year, $20,000 renewable scholarship, was awarded to Eliza Quidley, a Cape Hatteras Secondary School graduating senior. Eliza plans to study civil engineering at NC State University. From there, she intends to pursue a graduate degree in law. “I’m planning on taking 18 credit hours my first semester; without this scholarship, I would have to work, and it would be difficult to keep up with my studies,” said Eliza. “I’m very grateful to be able to focus on my education, first and foremost.”

The Sawyer Scholarship, a four-year, $20,000 renewable scholarship, was awarded to Alex Thorn, a First Flight High School graduating senior. Alex plans to study environmental sciences at UNC-Wilmington. Alex wrote, “It means so much to me and my family to use this money toward achieving my future academic goals and dreams while attending UNC-W!”

For a full list of scholarship recipients, please visit www.obcf.org/scholarships/recent-recipients.

“Our first scholarship fund was created in 1983 in honor of Inez Austin Daniels, who was born in Wanchese in 1890,” said Hatteras Island attorney and Community Foundation Scholarship Committee Chair Jean-Louise Dixon. “Inez went away to college at a time when women did not yet have the right to vote. This endowed fund was started with just a little more than $3,000; both the fund’s balance and its annual scholarship awards have grown steadily since it was established. In fact, the fund’s first $3,000 scholarship was just made, nearly 40 years and 40 scholarships later. The Inez Daniels Austin Scholarship Fund will continue to grow and award scholarships to deserving local students for generations to come.”

Scholarship funds have been generously donated by individuals, families, businesses, nonprofits, civic groups, and government agencies to help local students pursue higher education. Any community member can establish a scholarship fund with the Community Foundation by calling Nandy Stuart or MaryAnn Toboz at 252-261-8839, or can donate to an existing fund online at www.obcf.org/donate.