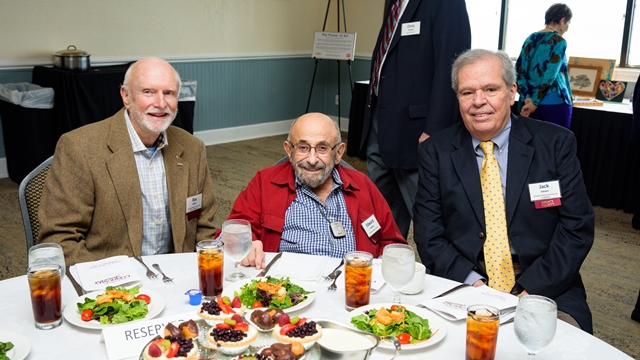 About 150 guests celebrated $750,000 in grants and scholarships awarded to the Outer Banks in 2017, and $8 million awarded since the Community Foundation’s establishment in 1982.

The event featured an exhibit by the Dare County Arts Council from its Power of Art Program, which was established in part by a grant from the Community Foundation. Power of Art serves special groups in need, including people with otherwise limited access to arts programming and education. The exhibit featured paintings, masks, poetry, jewelry, essays, and other works by artists from GEM, Monarch Beach Club, and the Veterans Writing Project.

After guests enjoyed a delicious lunch, Lorelei Costa, the Community Foundation’s executive director, described the 19 new endowments established in 2017, and said that each fund would be invested in perpetuity to award grants and scholarships to the Outer Banks for generations to come. She also talked about the Community Foundation’s unifying role, bringing together people from all backgrounds and beliefs to work together to improve the community and help others.

Members of the Community Foundation unanimously elected two new directors for the organization’s board: Lynda Hester of Manteo, and John Tucker of Southern Shores. Mr. Tucker is a lifelong educator, while Ms. Hester is retired from the US Coast Guard and the College of the Albemarle; both have served in extensive leadership roles in the Outer Banks’s nonprofit sector.

Mr. Leggat honored the grantees in attendance and announced over $600,000 in grants that were awarded in 2017. He also showed the winning videos from the Community Foundation’s annual contest. The Frisco Native American Museum came in first place, followed by Interfaith Community Outreach in second place, and Ocracoke Community Radio in third place. The winning videos, as well as all of the entries from this year and past years, can be viewed by scrolling down and clicking play.

Scott Brown and Nancy Sugg, co-chairs of the scholarship committee, announced that the Community Foundation had awarded over $150,000 in scholarships to 80 deserving students in 2017. They shared photos, videos, and stories from recent scholarship recipients.

Finally, Jane Webster conferred the 2018 Champion Award posthumously to Warren Judge, the community leader who devoted his life to serving the Outer Banks, and especially its youth. Ms. Webster enumerated Mr. Judge’s many honors, appointments, accomplishments, and leadership roles, including his 16 years of service on the Dare County Board of Commissioners, his receipt of Dare County Citizen of the Year in 2011, and his receipt of the Order of the Longleaf Pine Award in 2016.

Tess Judge accepted the award, along with his son, Mike Dixon, and granddaughter, Elizabeth Dixon. Ms. Judge reminded the audience of one of Mr. Judge’s favorite sayings: “At the end of the day, we are all One Dare County.”

Finally, Teresa Osborne, the president of the Community Foundation, closed the meeting by sharing plans for the upcoming year, and with thanks for all donors, volunteers, and community partners.

Photo: The three living founders of the Outer Banks Community Foundation were reunited at the organization’s annual meeting in February. From the left: Ray White, Edward Greene, and Jack Adams. Photograph by Biff Jennings, Shooters on the Beach.

Below: Press play to watch all of the videos ever submitted to our video contest since 2012!