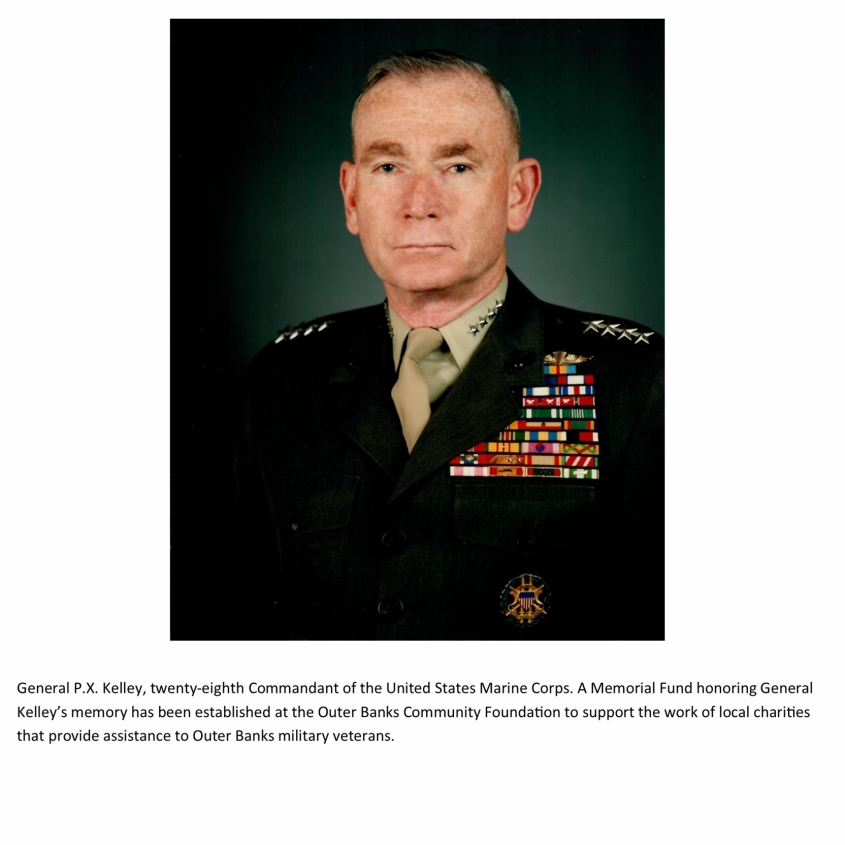 DONATE TO THE GENERAL P.X. KELLEY MEMORIAL FUND BELOW

A new fund has been created at the Outer Banks Community Foundation in honor of General P.X. Kelley, a highly decorated Vietnam veteran who served his country for 37 years and rose to become Commandant of the Marine Corps from 1983 – 1987. General Kelley’s daughter, Chris Kelley Cimko and her husband, John, established the donor-advised fund to honor General Kelley’s life and work, and to perpetuate his legacy of compassion and care for servicemen and women.

General Paul “P.X.” Kelley’s remarkable career, during which he played a pivotal role in preparing the Marine Corps for the twenty-first century, was characterized by his “personable and engaging” leadership style, his focus on innovation, his bravery on the battlefield, and the care he showed for those under his command. At age 53, Kelley became the youngest Marine to be promoted to the rank of Four-Star General, serving as both Commandant and Assistant Commandant. Following his retirement from the Marine Corps, President George H.W. Bush appointed Kelley to serve as Chairman of the American Battle Monuments Commission (ABMC). Under his leadership, the ABMC oversaw the design and construction of the National World War II Memorial and the Korean War Memorial on the National Mall in Washington, D.C.  At the age of 91, General Kelley passed away in December 2019, due to complications of Alzheimer’s disease. The Marine Corps paid tribute to General Kelley by noting that “his enduring legacy as Commandant was defined by his commitment to taking exceptional care of his Marines, re-instilling Marine Corps values, and modernizing the Corps for success on future battlefields.”

Explaining why she and her husband established the Memorial Fund in the Outer Banks, Chris explained how much North Carolina beaches have always meant to her and her dad:

“My dad and I spent so many happy days on North Carolina beaches. Searching for shells and shark’s teeth. Paddling around on life rafts. Running from rain clouds. All the happy memories that families make at the beach.  When John and I established our home in Duck, my dad was ill and unable to visit. Those happy memories became even more precious. We realized the Outer Banks is where we want to create a living legacy for my dad. The great folks at the Outer Banks Community Foundation have brought that dream to life.”

The fund’s purpose is to support the work of local charities that provide assistance to Outer Banks military veterans, and for other charitable purposes as determined and recommended by the Cimko’s.

“We are honored to be chosen as a partner for General Kelley’s memorial fund, and we embrace the obligation to use this fund to help Marines, armed service members, and their families,” said Community Foundation Board Chair and US Navy combat veteran Clark Twiddy. “Future grants from the General P.X. Kelley Memorial Fund will uphold the legacy personified not only by General Kelley, but by all Marines, going back to Tun’s Tavern in 1775, to ‘serve others first.’  Through this fund, the General’s faithful vision and leadership example, the love he showed for his Marines, and his love for Carolina beaches will become timeless.”

The new fund is structured as a perpetual endowment, which means that the principal of the fund will remain invested, while the earnings will be awarded each year to support military veterans and other causes important to General Kelley.

The Outer Banks Community Foundation currently manages more than 200 funds, including 39 donor-advised funds. Anyone can contribute to the General P.X. Kelley Memorial Fund below, or to any of the funds administered by the Community Foundation, at www.obcf.org/donate. Any individual, family, business, nonprofit organization, civic group, or private foundation can open a fund. Creating a charitable fund is an easy, flexible, and effective way to make a lasting impact on the community. Although each fund has a unique name, history, legacy, and purpose, they all share the same broad goal of improving lives and meeting local needs in Dare County and the Outer Banks.