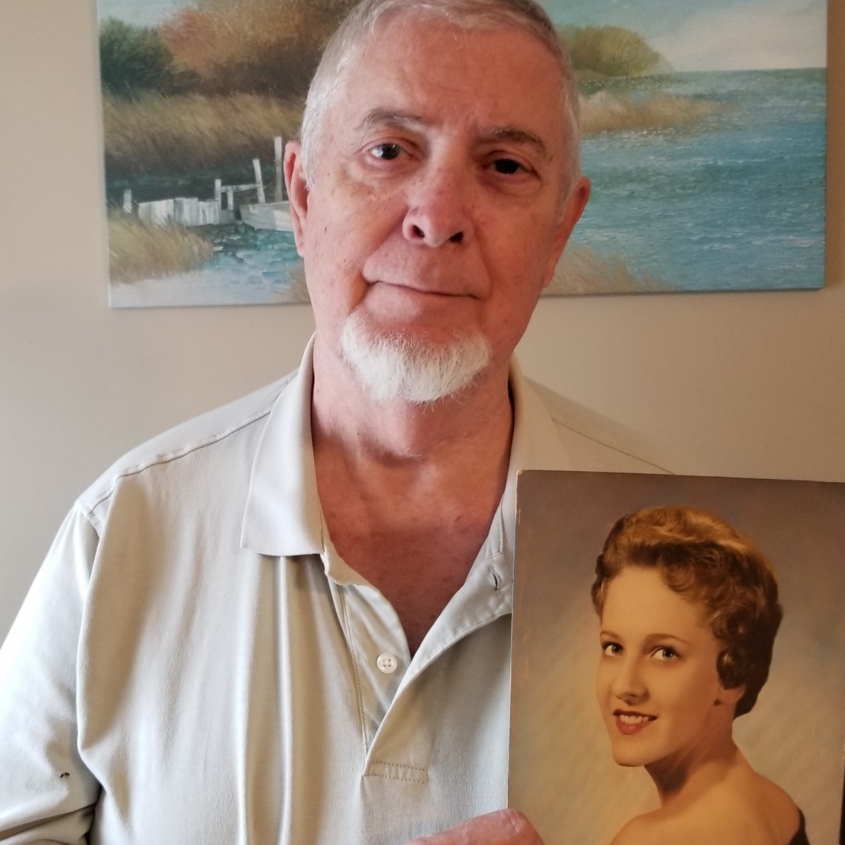 The Karen Phillips Scholarship began with a simple act of kindness. Karen asked her husband, Roy, to volunteer his time, and his one afternoon in a classroom became a lifelong commitment to education that will continue for generations to come.

“When we lived in Little Washington, Karen had gone out to work in (their son) Kevin’s third grade class. She came home one afternoon and said, ‘You’re going to school next Thursday,’” Roy recalled. “And I said, ‘OK, but why?’”

“Kevin has somebody in his class who cannot read kindergarten,” he was told. “So you can help the child to read, so the teacher doesn’t have to spend all her time trying to help him while the rest of the class sits around and twiddles their thumbs.”

Karen was a wife, mother of three, and a licensed professional nurse; she also was an enthusiastic community volunteer. She joined Beta Sigma Phi sorority in college and was active in Manteo High School Music Boosters, Roanoke Island Garden Club, Meals on Wheels, rotaries, women’s clubs, and more.

Inspired by Karen, and recognizing how great the need was, Roy found himself getting involved, too.

That simple act turned into a regular volunteer role—and a true avocation—for Roy that has had him devoting hundreds of hours to helping children with their studies, throughout much of his adult life.

“Sometimes I’ll get a kid who is just barely holding on,” recounted Roy. “And I can see it click…their eyes literally light up. ‘Oh, that’s not as hard as I thought it was,’ they’ll say.”

“You made my paycheck today,” Roy, who volunteers his time, will tell the child, “because I was able to make you understand what we are doing.”

Karen and Roy met nearly sixty years ago in high school, where they fell in love. Although they went to separate colleges, both pursued careers in medicine were married soon after Roy graduated with his Pharmacy degree. They began their careers and family in Washington, NC, moving to the Outer Banks in the 80s when Roy opened Island Pharmacy in Manteo.

Karen was 75 years old when she lost her battle with Parkinson’s disease in January 2019. In the wake of tragedy and grief, Roy created the Karen Phillips Scholarship as a living tribute to benefit the Outer Banks community. The scholarship ensures that generations of Outer Banks children will be supported in their dreams of pursuing their education beyond high school.

The scholarship is a lasting affirmation of those things Karen and Roy Phillips held dear: their love of learning, and their passion for helping children.

“It came about because we were both involved, in a round-about way, in education,” Roy explained. “We could see so many kids who needed some kind of scholarship.”

The Karen Phillips Scholarship will be awarded to a Dare County student who is planning on pursuing studies in a medical field. One of many academic awards the church gives out each year to deserving students, the scholarship will be handled through Mt. Olivet United Methodist Church in Manteo, where the couple worshipped. “I went in to Mt. Olivet and I asked, ‘Who do you deal with on scholarships?’ They said, ‘We deal with the Community Foundation, who are extremely easy to deal with,’” Roy said.

The scholarship will be managed as an endowment fund—also called a forever fund. It was important for Roy that the scholarship be endowed, that it would continue to be part of the Outer Banks for years as a tribute to his late wife.

As an endowed fund, the Community Foundation invests the money so the fund will continue to grow. The investment earnings provide scholarship awards each year, and the principal is maintained so that the fund will serve Outer Banks students for generations to come.

Roy wants future students to know that there will be a way for them to continue their education if that’s what they want.

“I set it up… so that when my grandchildren will have children, that money will still be given out in my wife’s name. She’s the one who first pushed me into helping kids,” he said.

June 2019 was a moment of pride for Roy, who saw the many of the first kids he helped, graduate from Manteo High School.

“This graduation… there were either seven or eight who were my original my kids. I felt very proud of the fact that my kids were graduating,” he said.

And now, in Karen’s name, each year there will be more kids who will be helped by the Phillips family legacy.

Disaster Relief: Your Gifts at Work

Plan Your Giving: What We Can Learn from Ebenezer Scrooge
Scroll to top