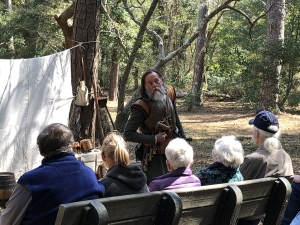 Willie Balderson, the Director of Living History and Historic Trades Interpretation for the Jamestown Rediscovery Foundation, gives a living-history performance on the first day of OBX History Weekend. He is portraying Anas Todkill, a Jamestown colonist who was sent out to search for Sir Walter Raleigh’s Lost Colony. Willie, as Todkill, explained life at Jamestown and his mission, revealing to the audience clues he discovered about the Lost Colony of Roanoke.

In late March, OBX History Weekend entertained local audiences with a free, interactive, public-oriented symposium titled Searchers of New Horizons.  The three-day event celebrated the inventors, dreamers and pioneers whose paths led them to the Outer Banks. Your Community Foundation was pleased to provide funding through a Community Enrichment grant that applied resources from endowments held here. The Aviation Education Fund for America, the Charles H. and Dorothy S. Luedemann Arts Fund, the Thomas and Annie Baum Memorial Fund, and the Community Fund all underwrote the grant that supported the Symposium.

We had a chance to catch up with lebame houston of Elizabeth R & Company, who produced the event with The First Colony Foundation and The National Park Service/Outer Banks Group, to learn about her perspective about the special, scholarly event.

“Dr. Gallay’s new research has resulted in a different view of Sir Walter Raleigh,” lebame said of the presentation by Dr. Alan Gallay of Texas Christian University.  “His concept of new world colonization clearly thrilled the North Carolinians in attendance.”

Day Two of the symposium featured nine 30 minute presentations and discussion panels focusing on the Carolina Algonquians and the fate of The Lost Colony. “Dr. Kim Sloan, the authority for colonist John White’s watercolors, excited the audience when she cast the gauntlet for more research focused on the so-called “Sloane Copies,” said lebame, “suggesting the possibility that these ‘copies’ could indeed be the John White originals.”

We extend heartfelt thanks and congratulations to the producers, presenters, participants, sponsors and funders who made OBX History Weekend a world-class historical symposium, exploring the centuries-long parade of searchers who have discovered secrets of the Outer Banks.

For more information about OBX History Weekend, visit https://www.firstcolonyfoundation.org/obx-history-weekend/. To make a contribution to any of the more than 200 funds held for the community at the Community Foundation, visit https://www.obcf.org/donate.