Blog - Latest News
You are here: Home1 / News & Updates2 / We’re Going to Get There: One Year Later, the Road to Recovery from Do... 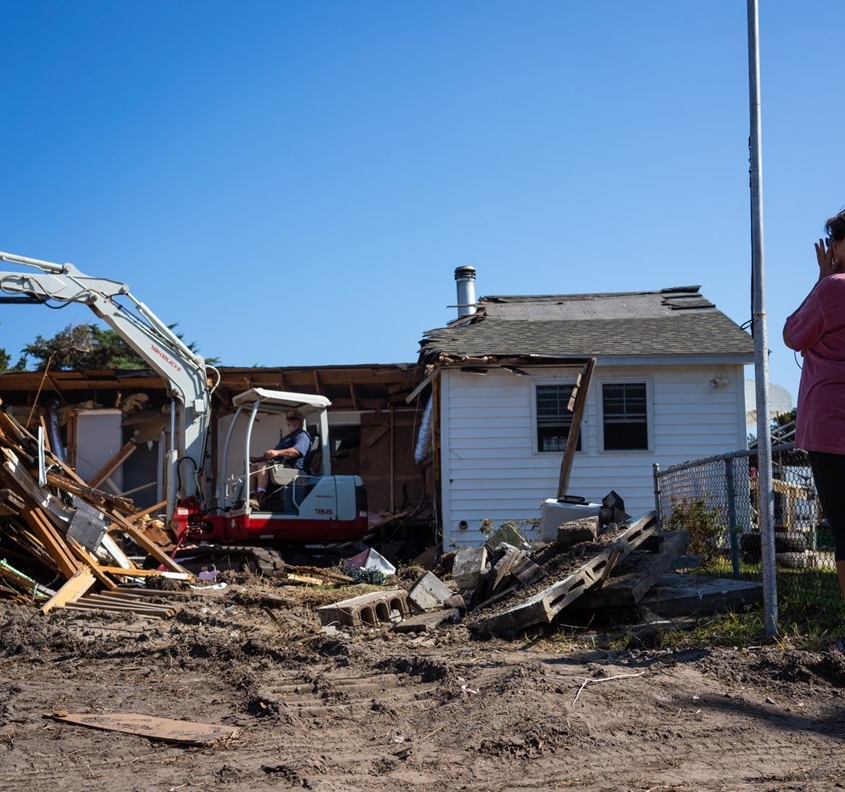 Part One of a Two-Part Series, One Year After the Hurricane

On a warm day in late August this year, Ocracoke looks much like it has for years. Traffic moves at a crawl through the village business district, the shops are full of people, restaurants are open, and golf carts and bikes seem the best way to get around.

“In general, it’s pretty brisk. And I’ve heard that from other people around the village as well. They’re feeling pretty good about the season,” Amy Howard, owner of the Village Craftsman, said. “All in all, that’s really good news.”

Yet Ocracoke is still a community on the mend from the devastation that Hurricane Dorian wreaked one year ago. Away from the main business district, among streets where only residents go, or along the quaint dirt roads that are still a part of the village, there is still a journey to be traveled.

“It’s just been really a real big challenge, so we’ve come a long way. We’re not fully back, but we’re going to get there,” Paige Bennett said. Bennett was one of a number of island residents who volunteered as caseworkers in the wake of Dorian to help her neighbors get the aid they needed.

On September 1, 2019 Hurricane Dorian made landfall at Elbow Cay in the Bahamas as a category five storm. For three days it lashed the island nation with sustained winds as strong as 185 mph, before beginning its trek to the north.

The path of the storm paralleled the coast, bypassing Florida, Georgia, and South Carolina, finally making landfall on Hatteras Island at 8:35 in the morning on September 6 as a powerful category one hurricane.

As the storm exited over the ocean, it left unprecedented levels of damage in its wake, especially on Ocracoke and Hatteras. But, as is often the case in coastal communities, it was not the wind that did the damage; rather, it was the water, the storm surge that inundated the towns and communities.

And the storm surge was like nothing anyone in those communities had ever experienced — 7 feet, 4 inches in Ocracoke Village, flooding every street, every yard, every property. On Hatteras Island the US Coast Guard gauge recorded a storm surge of 7 feet.

The Outer Banks Community Foundation may have been the first relief agency to recognize the enormity of what was happening, establishing a relief fund before flood waters had even receded.

Lorelei Costa, Community Foundation Executive Director, said, “On Friday, September 6 when Hurricane Dorian was still blowing, I started getting news that Ocracoke had just been slammed and that it was under water. It became immediately clear that Ocracoke, which has always been a part of our service area, would need help of some sort. I talked to my board president, Scott Brown, and we decided to encourage donors to earmark gifts for Ocracoke or Dare County, or split it between the two.”

The response was overwhelming, ultimately raising over $1.5 million for Ocracoke and Dare County within a few months. The first and largest donor was TowneBank, contributing the lead gift of $150,000 on the very next day after the storm. Eventually more than 6,000 individuals, businesses, and other groups contributed to the cause.

From the beginning, the needs of the communities were extraordinary. On Hatteras Island homes were flooded and businesses damaged, but it was Ocracoke that took the full brunt of the storm.

In Ocracoke, homes that had stood for years were knocked off their foundations; almost every home, every structure had some form of water damage. Harrowing tales of people clambering out of windows to safety, or climbing on counters or beds to escape rising waters, were common.

Yet, no one lost their life.

“If we didn’t have anything else to be thankful for, but the lack of the loss of life, that in itself is enough,” Pastor Ivey Belch of the Ocracoke Lifesaving Church said.

Immediately after the storm, Pastor Belch was at the heart of the recovery process. His church’s Bread of Life Food Pantry has been a part of Ocracoke since 2017. Partially flooded by Dorian, the pantry moved temporarily to the Ocracoke Volunteer Fire Station, which became the hub of relief efforts and donated supplies.

Food, cleaning supplies, and household goods poured into Ocracoke as Dorian exited. But just getting the supplies to the island proved to be a logistical nightmare; the storm surge ripped great chunks of asphalt from the roadbed of NC 12 on the north end of the island. The road was impassable for weeks, and the Ocracoke/Hatteras ferry trip went from a one-hour trip to two-and-a-half hours. The Swan Quarter and Cedar Island ferries continued service, but a round trip now took five to six hours.

The immediate needs of the community quickly became apparent — estimates put the number of uninhabitable homes as high as 40% in Ocracoke Village. Even homes that did not have structural damage still had losses.

“It did not get into my living quarters,” Connie Leinbach, the editor of the Ocracoke Observer, said. “But…it was chest high downstairs. I had to replace my washer and dryer.”

Housing was not the only problem. According to Hyde County Commissioner Tom Pahl, in a speech at the Community Foundation’s Annual Meeting, 88 out of 105 businesses on Ocracoke sustained significant damage. Many were left unemployed, and the financial strain was extraordinary.

The first grants from the Community Foundation were for assistance with the immediate needs of the community — paying for food, helping with utility and medical bills, replacing furniture and appliances — simply keeping day-to-day life moving forward.

Pastor Belch believes the speed at which the first grants and donations came to the island were important to the strength of the recovery.

That aid was invaluable. Although there has been significant funding for large projects to restore roads and infrastructure from government agencies, neither the state nor federal government had the flexibility or speed to help a family immediately who had lost a home or a job.

Working with the Community Foundation, a committee of volunteers from the Ocracoke Fire Department came together to distribute funds to storm victims. But in a community as tightly knit as Ocracoke, it was important that everyone believed in the integrity of the system. Thus, a group of volunteer caseworkers was formed to interview clients to ascertain needs, and pass along that information anonymously to decision-makers, with victims’ names and addresses withheld.

In an interview in November 2019 for the Coastal Review Online, Fire Department committee member Charles Temple explained the process.

“What we settled on was using case workers who could be advocates for their clients to us, but we wouldn’t know who the client was until we had already made decisions about giving out money,” he said.

Over time the needs of the community changed. By the end of November, NC 12 on the north end of the island had been repaired, and the goods, services, and workers needed to repair the damage done by Dorian were coming to Ocracoke. But as those goods and services reached the island, the necessity of addressing the damage to Ocracoke’s homes — and the critical shortage of housing — became even more apparent.

As 2019 ended and the new year began, the new challenge facing the Relief Fund was what could be done for the homes of Ocracoke and Hatteras Island.

Today, a year after Dorian, the Community Foundation’s Disaster Relief Fund has now helped over 350 families from Ocracoke and Dare County, in partnership with the Ocracoke Fire Department, Interfaith Community Outreach, Cape Hatteras United Methodist Men, Hyde County, and the United Methodist Committee on Relief. But the challenges to address housing, increase our community’s resiliency, and make our communities whole, have continued, especially through COVID.

Coming Up: Part Two: Housing, and the COVID Crisis

We’re Going to Get There: The Road to Recovery from Dorian, Part 2
Scroll to top