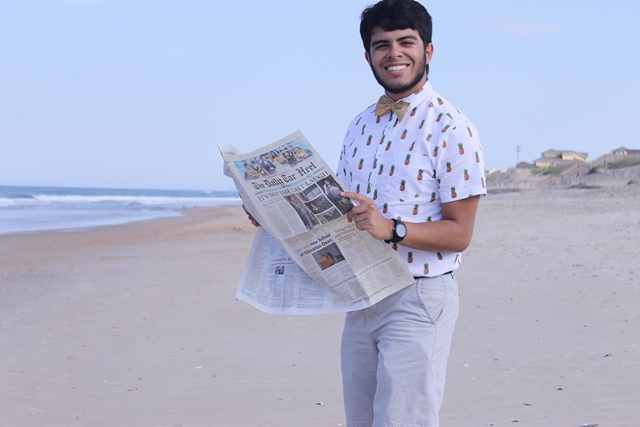 From concentrations in accounting and financial management to marketing and public relations, the Outer Banks Community Foundation’s Milton A. Jewell Internship Program is both a prestigious and serious affair.

“José stuck out to us not only for all of his experience, but also for his passion for the field of journalism,” Lorelei said. “We want to use this internship to really give students a way to build their résumés and earn some money they can later use to continue their education. José is going to add so much to our programs this summer, and it’s an honor to work with him.”

The award was established by bequest by the late Ruth Medgyes of Southern Shores and the application is open to the Community Foundation’s previous scholarship recipients. Last year, Aaron Zeigler, a First Flight High School 2013 graduate, was selected as the intern and focused on financial management and accounting.

“I still remember being shocked by how many times my name was called during the school’s scholarship night,” José said. “It was an extremely validating experience to have such a respectable organization full of so many amazing individuals show faith in someone like me.”

With some help from the Community Foundation, he graduated from Durham Technical Community College in mid-May with a 3.944 GPA and will continue his pursuit of a Journalism degree as a junior at UNC Chapel Hill in the fall. There, he will serve as The Daily Tar Heel’s Visual Managing Editor. The Daily Tar Heel is UNC Chapel Hill’s award-winning student newspaper, where José has worked for the past two years, serving as 2015-2016’s Design & Graphics Editor.

“I have been lucky enough to learn from some really great journalists in the past few years and I can’t wait to put these skills to use to give back to an organization that has given so much to me and many others already,” José said.

He will be working closely with Lorelei for 12 weeks, managing the Community Foundation’s public relations and marketing.

“I’ve only been here for two weeks and I’ve learned more than I could have ever imagined,” José said. “I can’t wait to see what else these next 10 weeks will teach me.”

Community Foundation Awards Over $150,000 in Scholarships