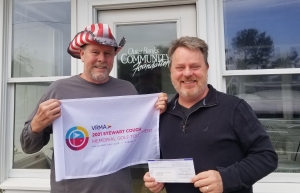 Outer Banks Association of Realtors (OBAR) President and Vacation Rental Management Association (VRMA) member Doug Brindley recently delivered an $8,000 contribution to the Community Foundation from VRMA for the R. Stewart Couch Scholarship Fund. The donation was the result of proceeds from a 2021 golf tournament established in honor of Stewart Couch, a Hatteras Island native and a successful businessman, world traveler, and beloved community leader.

Brindley was instrumental in establishing the VRMA Stewart Couch Golf Tournament. The first of what will be an annual fundraising event was held last October at The Quarry Golf Club in San Antonio, TX, just ahead of the 2021 VRMA International Conference.

Stewart Couch was pioneer and trendsetter in the vacation rental industry. He grew a fledgling Hatteras Island Realty to a firm that managed nearly 600 homes and employed almost 200 people during the tourist season. He served as Director of VRMA and was a Founding Director of NC VRMA. Couch was 2004 President of Outer Banks Association of Realtors, and he was a passionate and lifelong champion of all things Hatteras Island. Stewart sadly lost his life in 2012 at age 62 while on a surf trip in Nicaragua.

“Stewart and I were good friends,” said Doug Brindley, OBAR’s 2022 President and Brindley Beach Vacations and Sales business owner. “When I mentioned we name the new VRMA tournament in his honor, that was it. Everyone there knows Stewart or knows his story. I knew if the tournament was in his honor, it would be a success.”

“We are honored to carry on a small part of Stewart’s great legacy through the memorial scholarship established in his name,” said Community Foundation President and CEO Chris Sawin. “His kindness and his love for the people of Hatteras Island will live on through the students helped by his scholarship fund each year.”