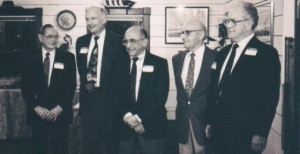 Before internet, cell phones, and zoom, 40 years ago on November 16, 1982, the Outer Banks Community Foundation held its first board meeting. Jack Adams, Edward Greene, Andy Griffith, David Stick, and Martin Kellogg, Jr. made up the board of directors (Ray White joined the board in December of ’82). The Articles of Incorporation had been filed earlier in the month, and the new by-laws were unanimously approved at this first meeting. And so it began…

It just seems fitting that the 40th anniversary of this auspicious occasion happens during Community Foundation Week. Another reason to celebrate and commemorate: today marks National Philanthropy Day all across the US.

There are 750 U.S. Community Foundations, each working to support the efforts that will help the places we call home continue to flourish and grow. They bring donors together, in a way that few other institutions can. And they reinforce local nonprofit organizations through grants, workshops, and other forms of support.

Our Outer Banks Community Foundation’s origins were grass-roots; everyone was invited to “give back” in ways large and small. The first grants awarded helped Hatteras Island neighbors, by installing lighting on school grounds and by paying for 800-number service so Hatteras residents needing to call Outer Banks Hotline could do so free of charge. Since then, thousands of grants and scholarships, totaling more than $12 million, have been given back to support charitable causes up and down our beaches. And the endowments held here, some started back in the 80’s and some bolstered by large bequests, means that $25 million in assets are invested for giving today, and for generations to come.

We are proud to serve the people and places of the Outer Banks, through our Community Foundation. We’re very grateful to the hard-working nonprofit leaders, and especially to the many, many local citizens who contribute their time, talents, and treasure to charitable causes at home. Philanthropy Day is about YOU. Thank you for your caring, your compassion, and your can-do-it-tiveness. Together we’re making all kinds of changes for good on the Outer Banks.